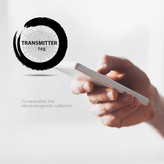 The Transmitter Device Tag is a sticker that protects you against the possible damaging effects from mobile phone and other wireless technology. The sticker has been developed by Janosh and contains an extra terrestrial code (source: Arcturians) to neutralize the electromagnetic radiation. The apparatus, to which you attach it to, works just like normal, without any negative effect on your health.

The encoding is based on the power of bio-geometry and passive quantum technology.

Awareness with technology
Phoning, Skype, Google and app-ing ... we do it every day. It's so normal that we often don't stop and think about the possible consequences. The electromagnetic radiation to which we are subjected, when we call on a mobile phone or wireless internet is possibly damaging for our health. Scientists advise that children should not call using a mobile phone. But if it's damaging for our children, what about us too?

At the moment there is a lot of research being done about the possible effects of the technology, which we work with now and all the results point in the same direction, and that is that using wireless apparatus can damage the cells in our body and negatively influence our auric field. This means that we are forced to be more aware with the technology we are offered. The Transmitter Device Tag by Janosh supports this awareness and helps everyone to avoid the possible damaging effects of wireless phones and internet.

No Energy? Stress, at the moment it's apparent in all forms and becomes a constant pressure on our system. A strong stress factor is electromagnetic radiation. After a while your vitality decreases. Physical, mental or emotional symptoms gain the upper hand. You don't feel well and you have less energy.

Remove any dust or fatty substances from the place where you want to apply the sticker. Remove the Transmitter Device Tag from the backing strip and stick it to the outer surface of your gsm, laptop or tablet (preferably where the battery is) – the direction of the code is not important. The sticker works all the time and does not have to be re-charged. As far as wireless phone sets are concerned, the sticker should be placed on the basic unit. Placing the sticker on the antenna can neutralize the radiation on a Wifi router.

When a sticker has been placed on a mobile phone this will protect against any temperature increase in the head and incriminating radiation that is passed on through the cells of your skin. This happens without having any effect on the normal function of the telephone.

Reach us by phone: